'The competition that goes on giving' is how Rob McLellan described The Pitch after his winning entry was made into Rahab, a sci-fi short that landed him a Hollywood manager.

And you don’t have to top The Pitch to benefit from it, as shown by previous finalists going on to make feature films, such as Francis Annan’s Escape From Pretoria (produced by The Pitch consultants Footprint Films).

Below is a breakdown of the training, development and awards available through The Pitch. The film industry can be extremely discouraging. We try to be as supportive, candid and helpful as possible – offering an open ear, even if we can’t offer an open wallet.

If you make the In Consideration stage, you’ll be invited to a unique masterclass providing insight and skills that will help you well beyond The Pitch. For those who make the shortlist, the next stage of selection, we run a day masterclass which will give you plenty of time to learn and practise skills that you will need for later in the process. 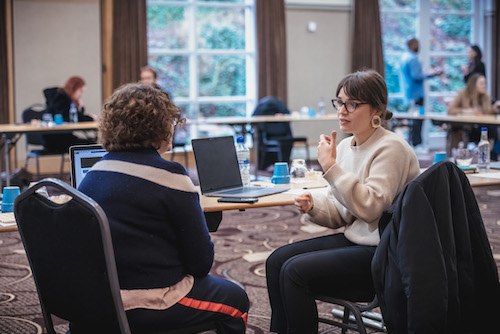 If your pitch makes the final ten then you will be invited on The Pitch Residential. This is a four-day course in story development and filmmaking, with The Pitch team and story consultants. Hosted at the Low Wood Bay Hotel, Windermere, it is worth hundreds in and of itself, but finalists have most enjoyed the sense of community it delivers.

Taking place at the prestigious National Film and Television School, The Pitch Final will see the top ten entrants pitch in person to a panel of industry experts. The top four entrants are invited back the following day for further discussion before winning pitches are chosen in Comedy and Drama. There is an evening reception for all finalists, to meet the judges in a less formal setting, plus Q&As throughout the day with film industry figures who offer their advice and experience.

Two filmmakers will work with The Pitch production team at Reel Issues Films to make their film, benefiting from a combination of cash and production support. But that’s not all ...

We are also pleased to offer The Lucy Scher Award for the outstanding female finalist, as chosen by the judging panel.

Lucy was an exceptional person, an expert story and script developer, whom we were fortunate enough to have as a judge for The Pitch and to count as a dear friend.

Sadly she died in 2018. We wanted to honour her memory with an award that further supported an emerging filmmaker, as she did throughout her life.

The Lucy Scher Award offers script development and mentoring consultations with Justine Hart, a screenwriter and story consultant who worked closely with Lucy for many years.

The winners of The Pitch will get to make their short films with a cash budget from our £50,000 pot and further extensive production support.

We want you to have the best possible career boost from this opportunity and to showcase the film – and your talent – to the world.

The process begins with developing the script, either with you as the writer or – if you have another role on the production – in conjunction with you and the writer.

You will be working with Pitch founder Luke Walton and producer Jackie Sheppard of Footprint Films, as well as a story development consultant of their choosing.

Filmmaking is a collaborative process and it is worth noting that winning The Pitch does not mean receiving a blank cheque. We will work with you to ensure the script provides a powerful emotional experience – whether it is laughter or tears, fear or thrills – and serves the richness of the underlying source material.

Once the script is ready we will work with the winner to schedule, cast and crew the production, with the goal of shooting in the summer immediately following the Finals (ie, the Finals take place in January, so the shoot would ideally be in June/July). The aim is to have the film finished for festival entries at the end of the year and for showcasing at the next Pitch Finals.

The finished film will play at The Pitch Finals the following year and be entered into at least ten film festivals worldwide.

We don’t pretend The Pitch – or any one thing – is the ticket to success in filmmaking. But we want to help you with your journey.